Our customers say it best.

Here are just a few of the hard-working DIYers in Minneapolis/St. Paul and and beyond that we have helped since 1993.

Got a few words about your experience working with Pete’s? Email it to Kadee, we love the feedback. And we ❤  our Twin Cities neighborhoods and our customers across the U.S. 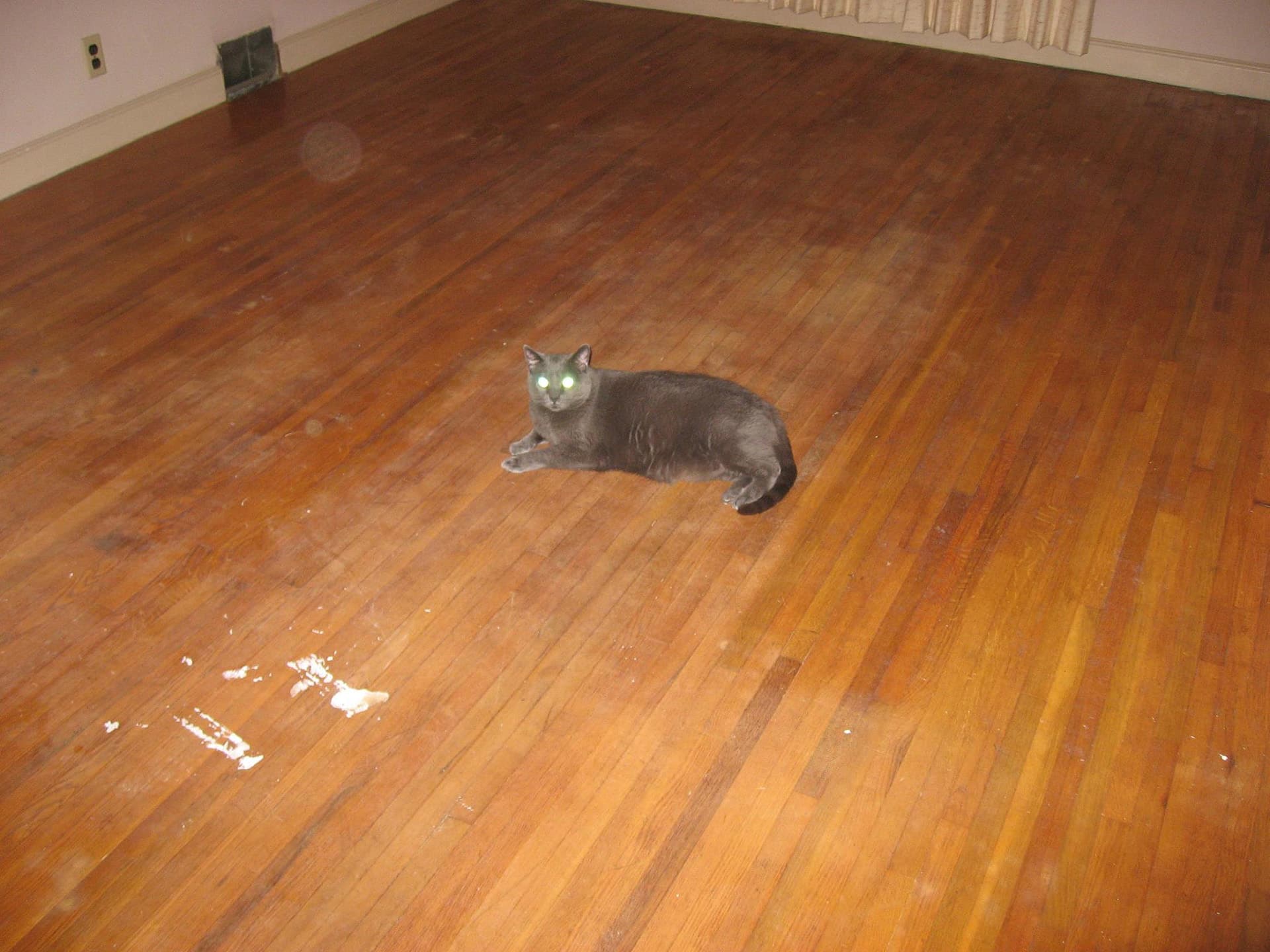 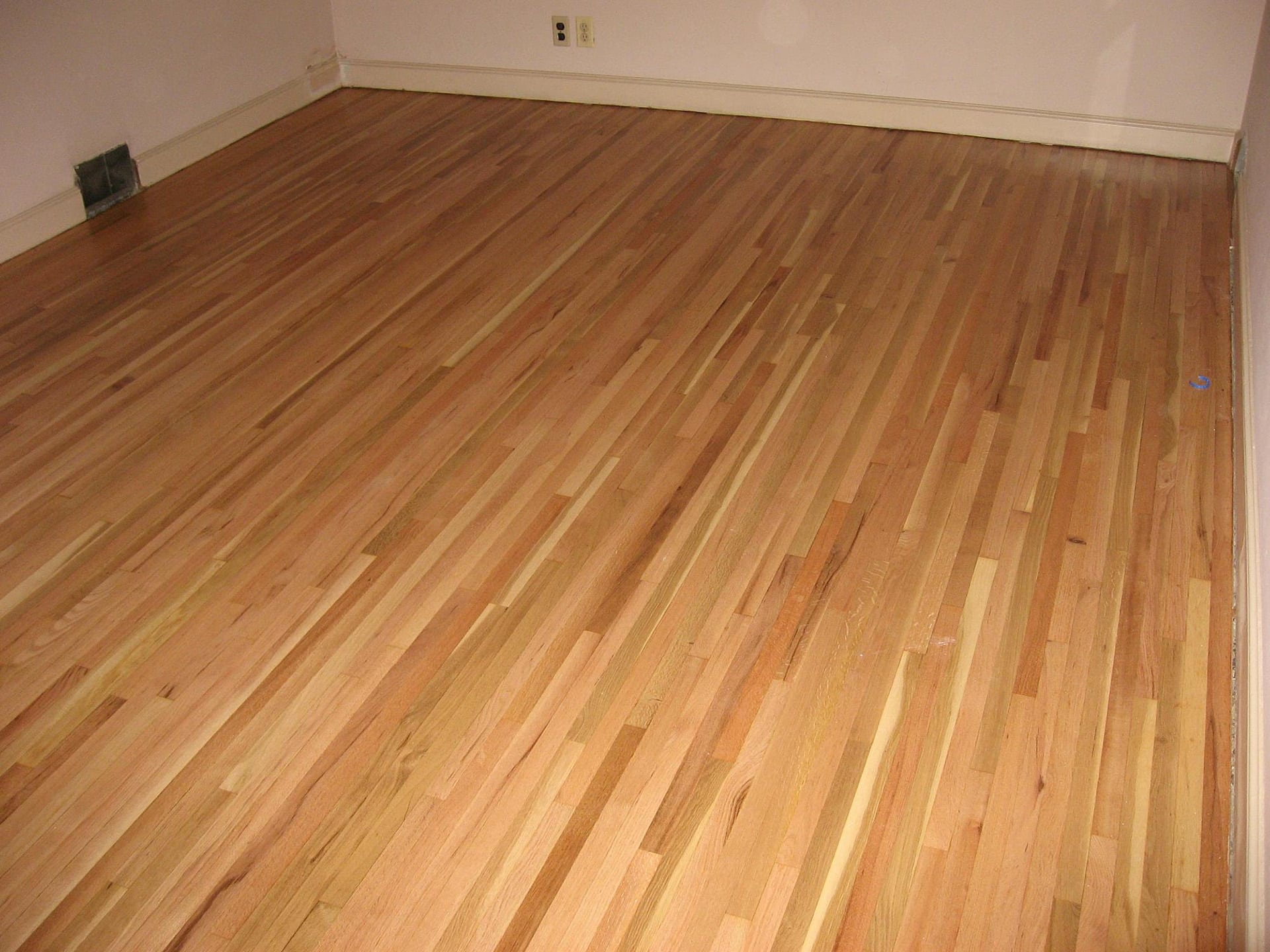 “I have been meaning to post these pics for such a long time now, I feel like I should return my free t-shirt. My wife and I found Pete’s Hardwood Floors soon after we moved and realized we needed to redo our floors before we moved anything in. We couldn’t have been more impressed with this company.

Their professionalism, their products and their overall care of their customers is why I am still writing this five months later. I thought Kadee did a fantastic job training us on the “machines” and she didn’t let us leave unless she felt comfortable that we knew what we were doing.

We even ended up calling her back several times for advice, which she generously gave. The actual process of “redoing” the floors was one of the most physically challenging experiences in my life, but every time I look at these floors, it was worth every minute of it. Thanks again Pete’s!” 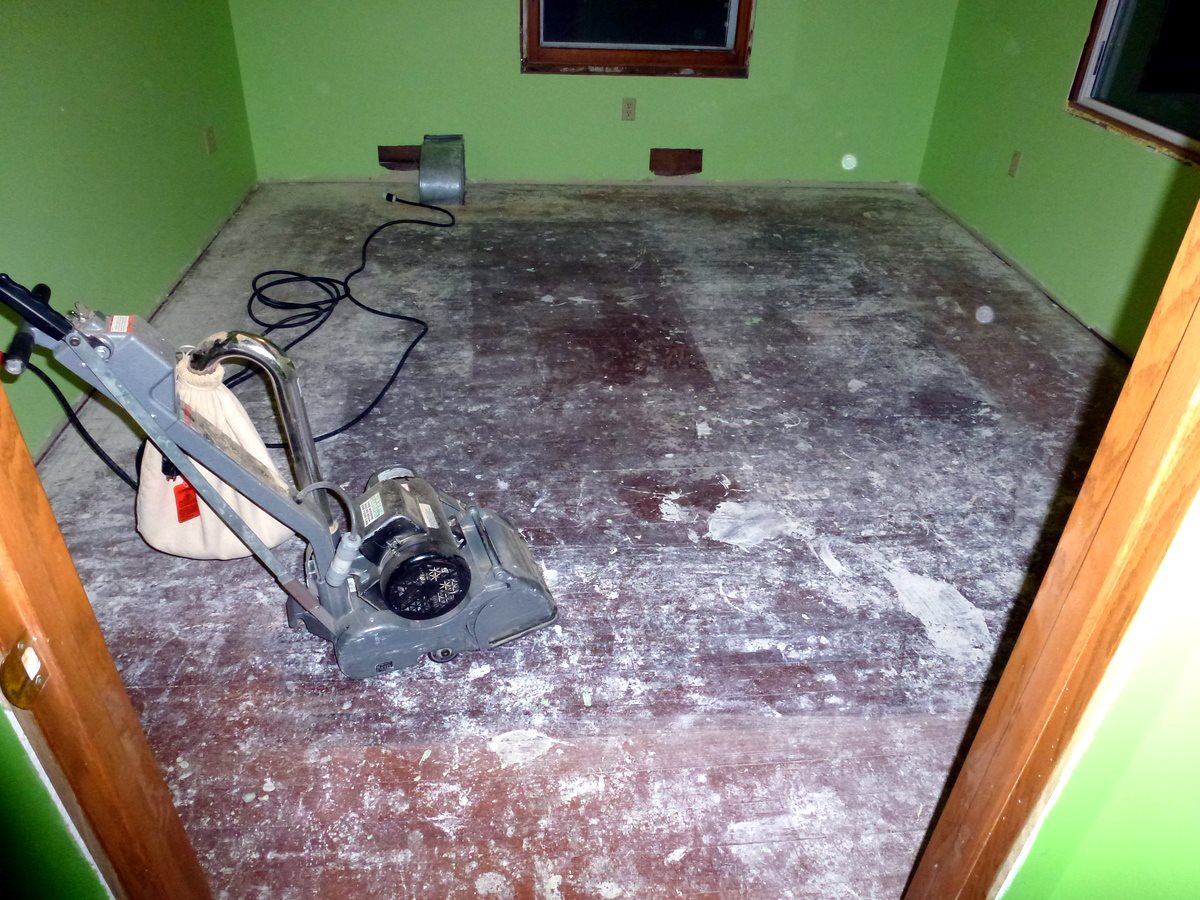 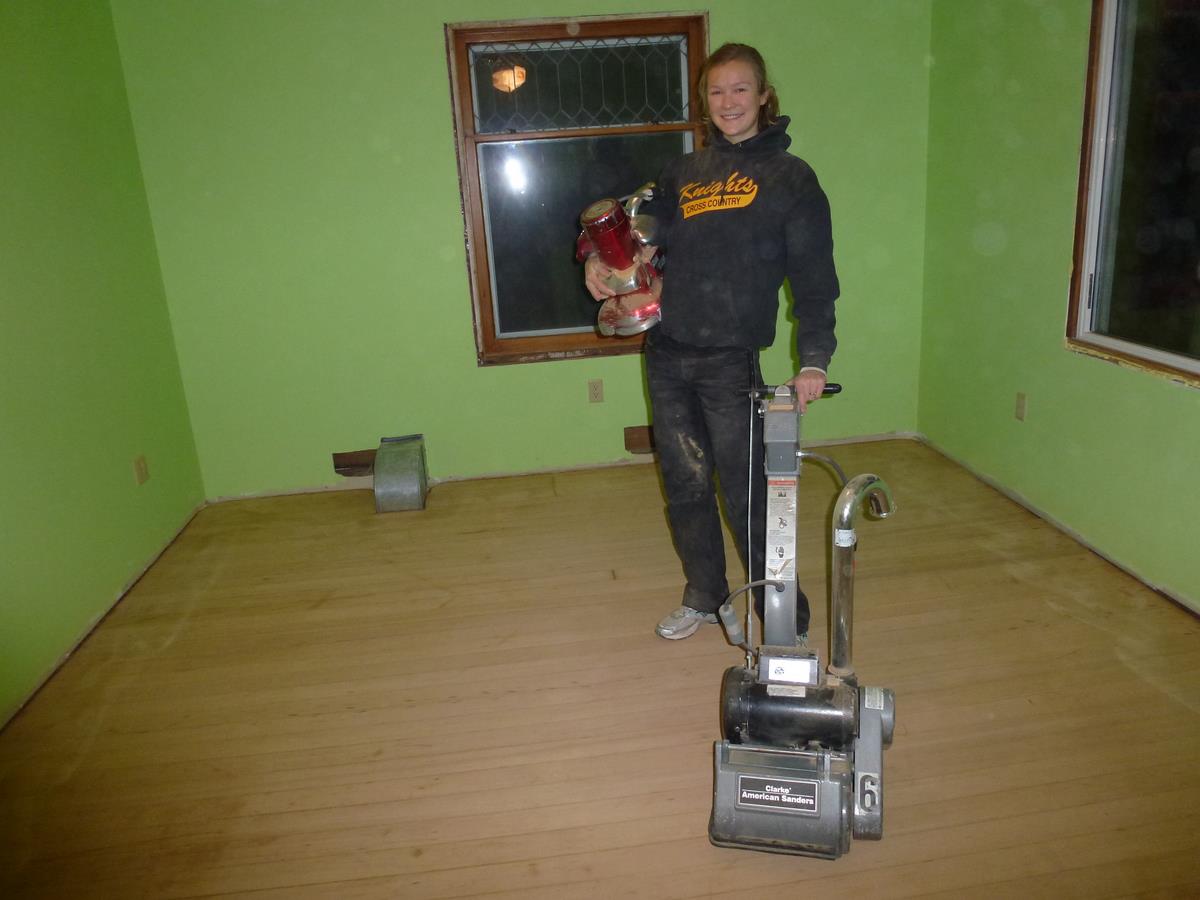 “The proud and pooped Irene around 10 p.m. last Thursday night, after going through five different grits of sandpaper. I had to take a photo with my new friends, the floor sander #6, and the edger #6. I named Edger #6 “Beauty and the Beast,” as it was a beautiful thing, but beastly on the low back. All in all, really happy with the final product.

Makes me smile just looking at the before and after pics.They are so pretty! and Shiny! Highly recommend Pete’s for the best flooring edger rental in MN!” 😉 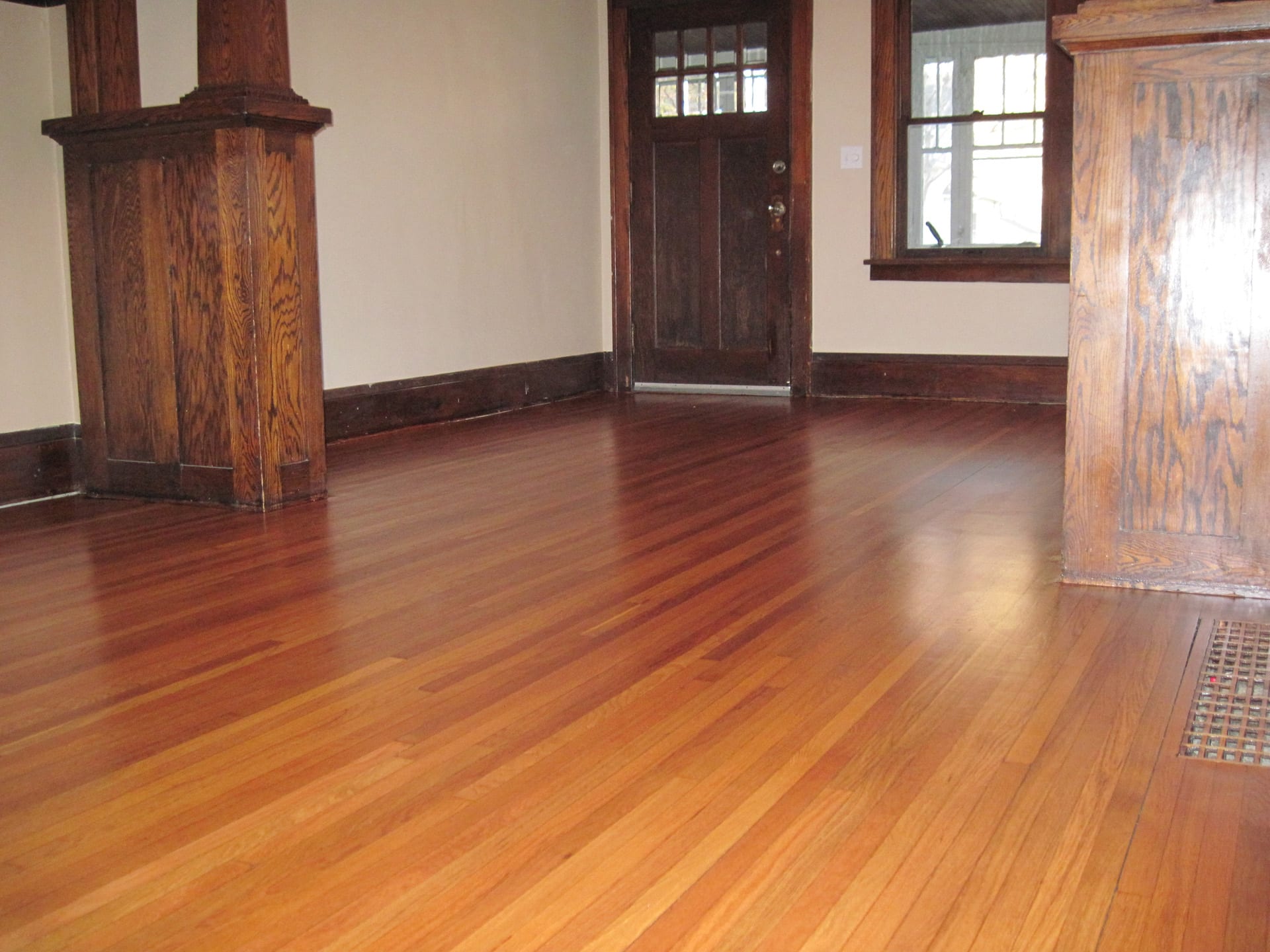 “I’m a giant nerd for my beautiful floors.They have improved this house unbelievably. People that didn’t see it in the “before” state don’t understand my joy/obsession.

Just looking at these photos tonight, now that a few months have passed, I’m shocked at how bad they really were and that I was considering living on them in that condition.

Thanks for all your help. I’m sure we took on too much but at least we felt like we knew what we were doing.” 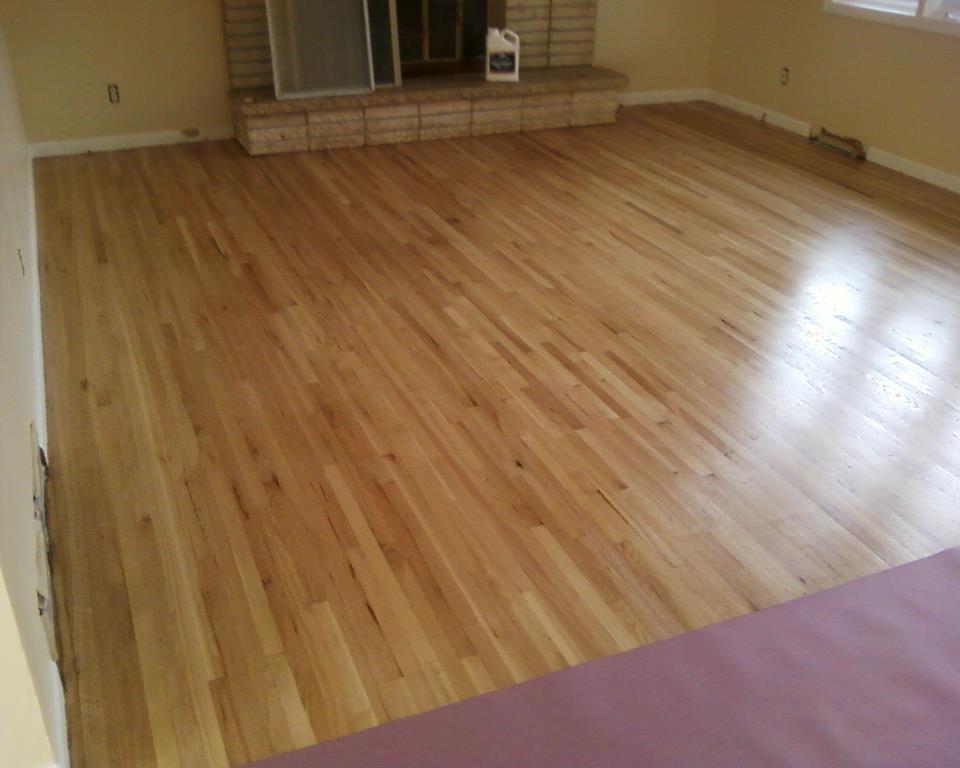 “To the Staff at Pete’s…Thanks for all your support and help, it was a huge floor measuring in at 900 sq ft but all in all it turned out great! Best buffer rental in MN I’ve been to.” 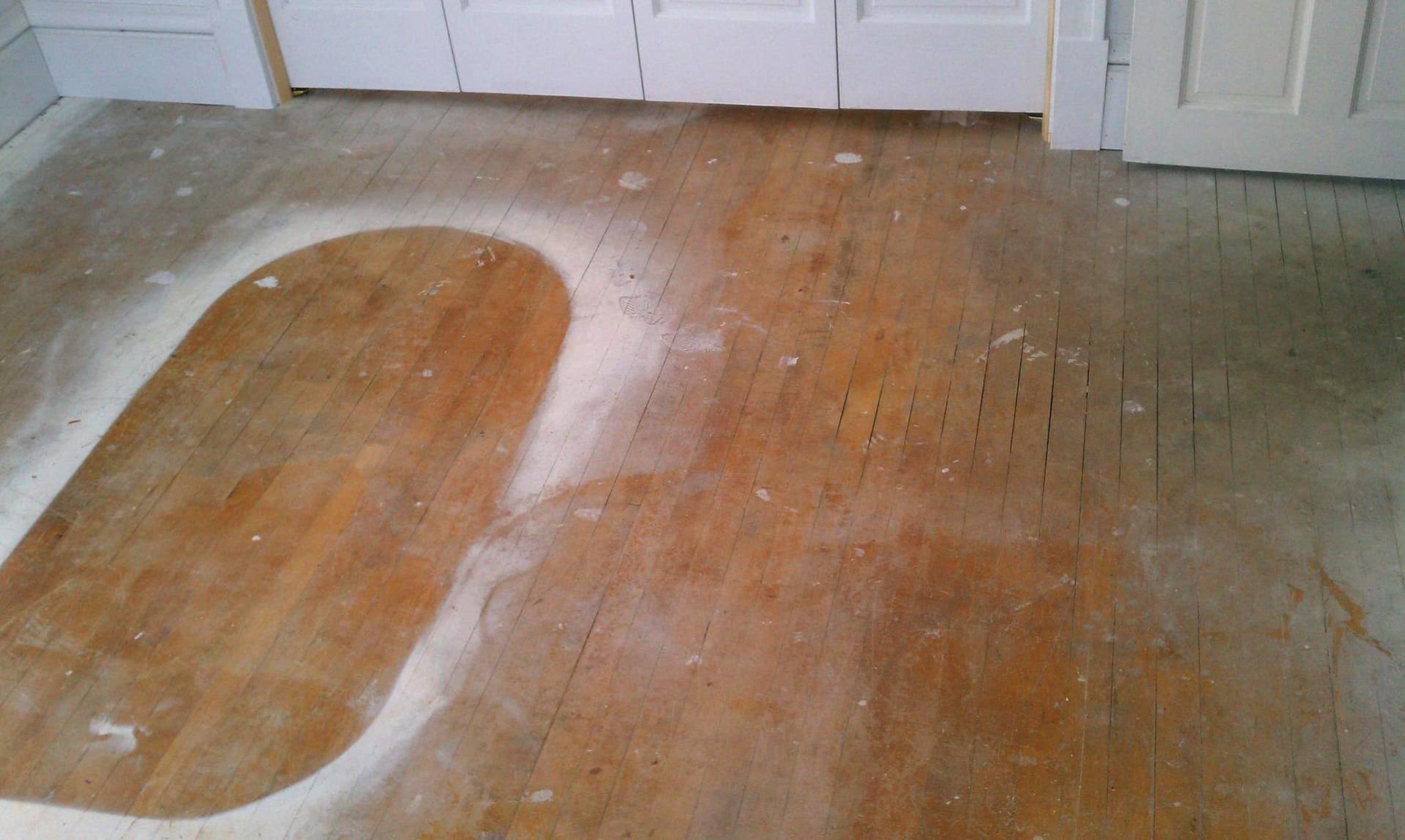 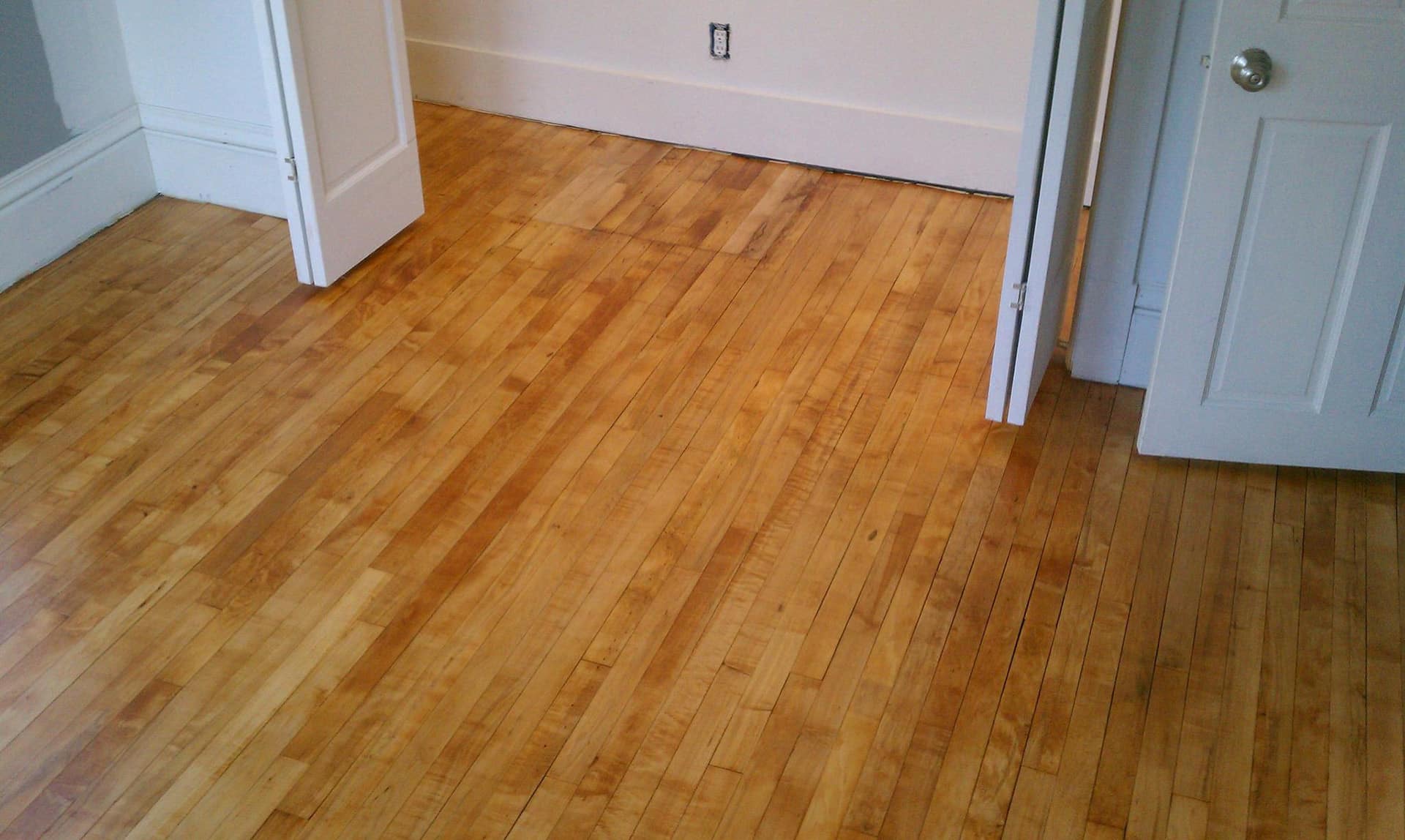 “Just finished sanding and finishing the maple floors of our master bedroom and hallway with the help of Pete’s! Thanks to Kadee for her refresher course, sound tips, and enthusiastic encouragement!! Thought of you often at 1:00 in the morning…WHILE sanding, of course!! 🙂

This photo is of the bedroom floor pre-sanding—notice an outline of the claw-foot tub which the previous owners decided to spray paint while using the floor as a drop cloth! So thoughtful!” 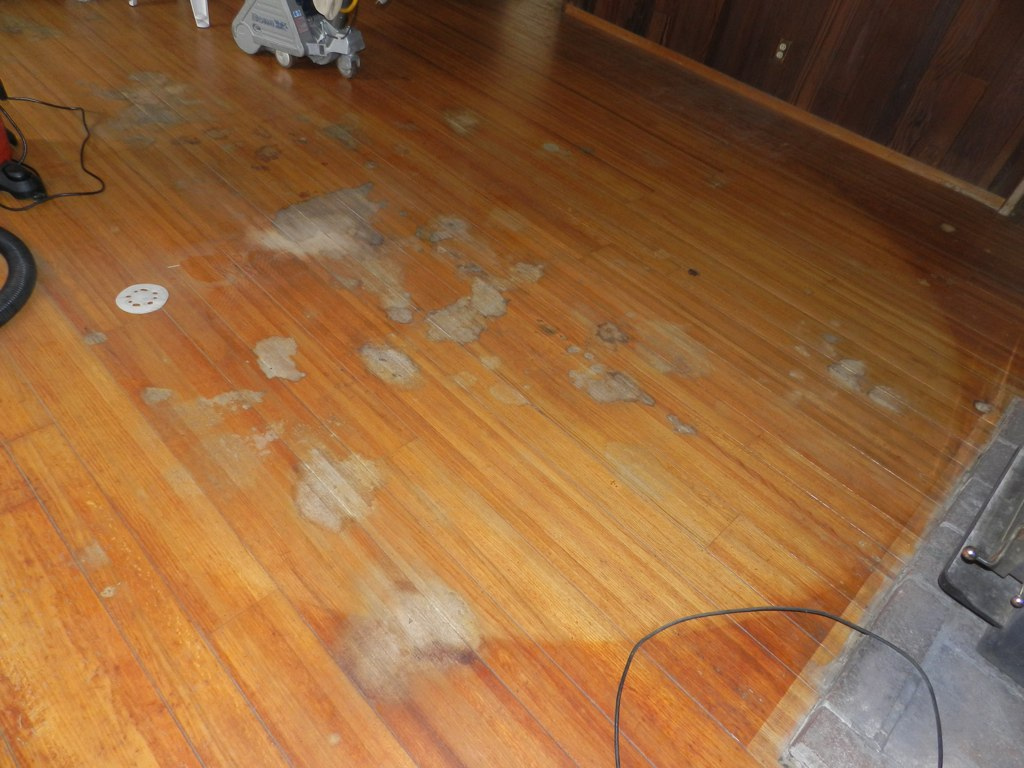 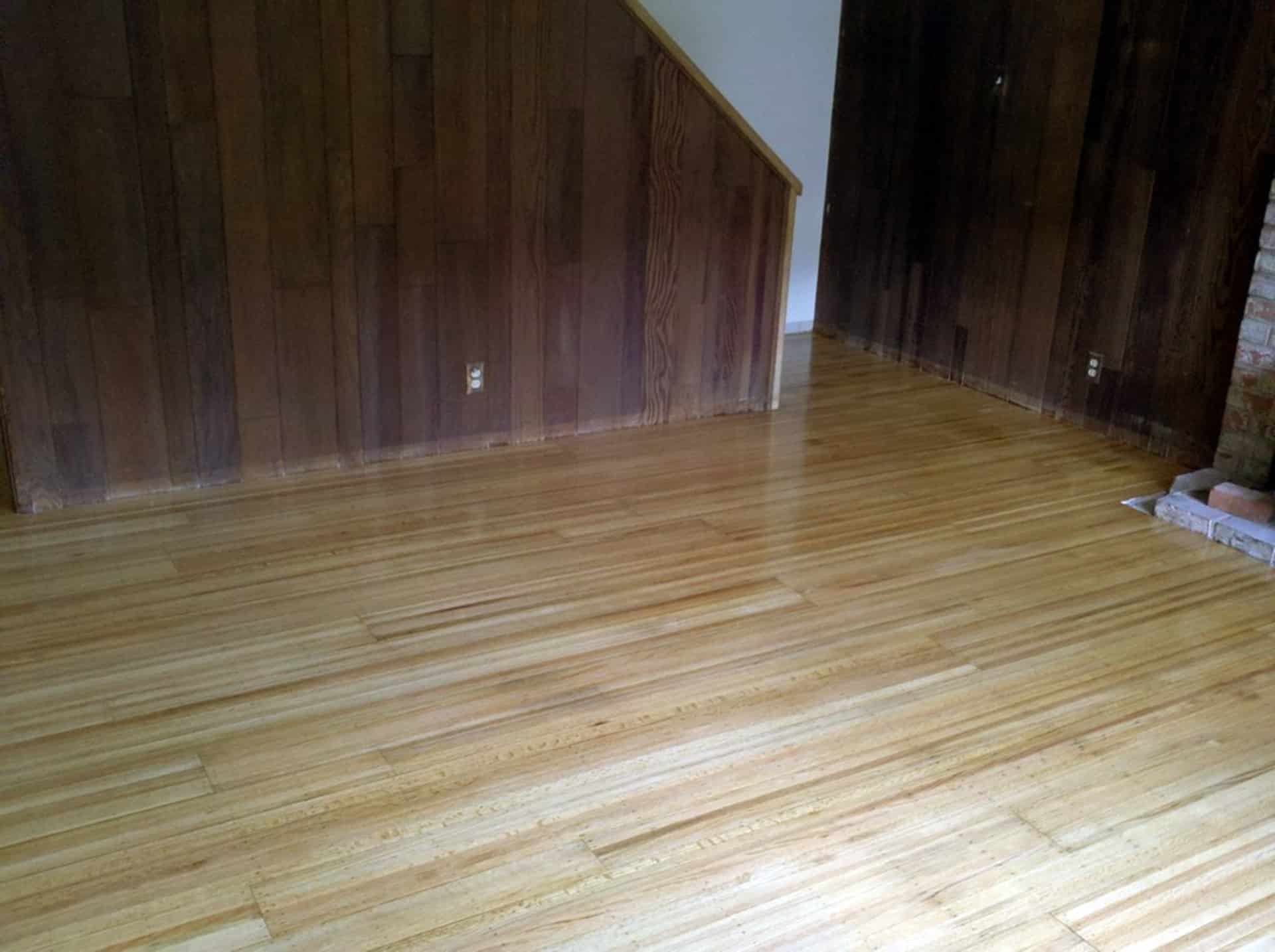 “We’d like to extend our thanks and gratitude for the invaluable information posted on your website. We especially enjoyed the article with compelling arguments against staining your floors as well as the follow up article since that is precisely what we’re in doing. We found tips on your site that we have not seen anywhere else on the internet and we have done A LOT of searching and reading. What a fantastic business you have with an actual wood floor where customers can come in and get some practice!

We just bought our first house, it was build in 1955, has top nailed white oak throughout, with some nasty stains on it from being covered with a nasty shag, and probably a little mutt free to mark as he pleased on top of it. The reason we decided to stain was that we could get 90% of the dark stains out with oxalic acid neutralized with borax, but there are some slight shades here and there, and we think a stain will be a better alternative to 7-8 spots of new wood in the living room alone.

The original floor is incredibly tight, and even though I matched the boards with the same size oak and cut there is just a very slight gap (<1/16″) between the new boards that I absolutely had to replace that needed to be filled. Short of replacing the whole floor where I’m free to lay the boards tight on both sides there is just no way I can replicate the original wood fit, or grain for that matter.

Anyhow, we feel more confident after reading through your articles and I will do a last check of the floor for sanding marks with a bright light and a magnifying glass before staining. Our best wishes to you and your crew.” 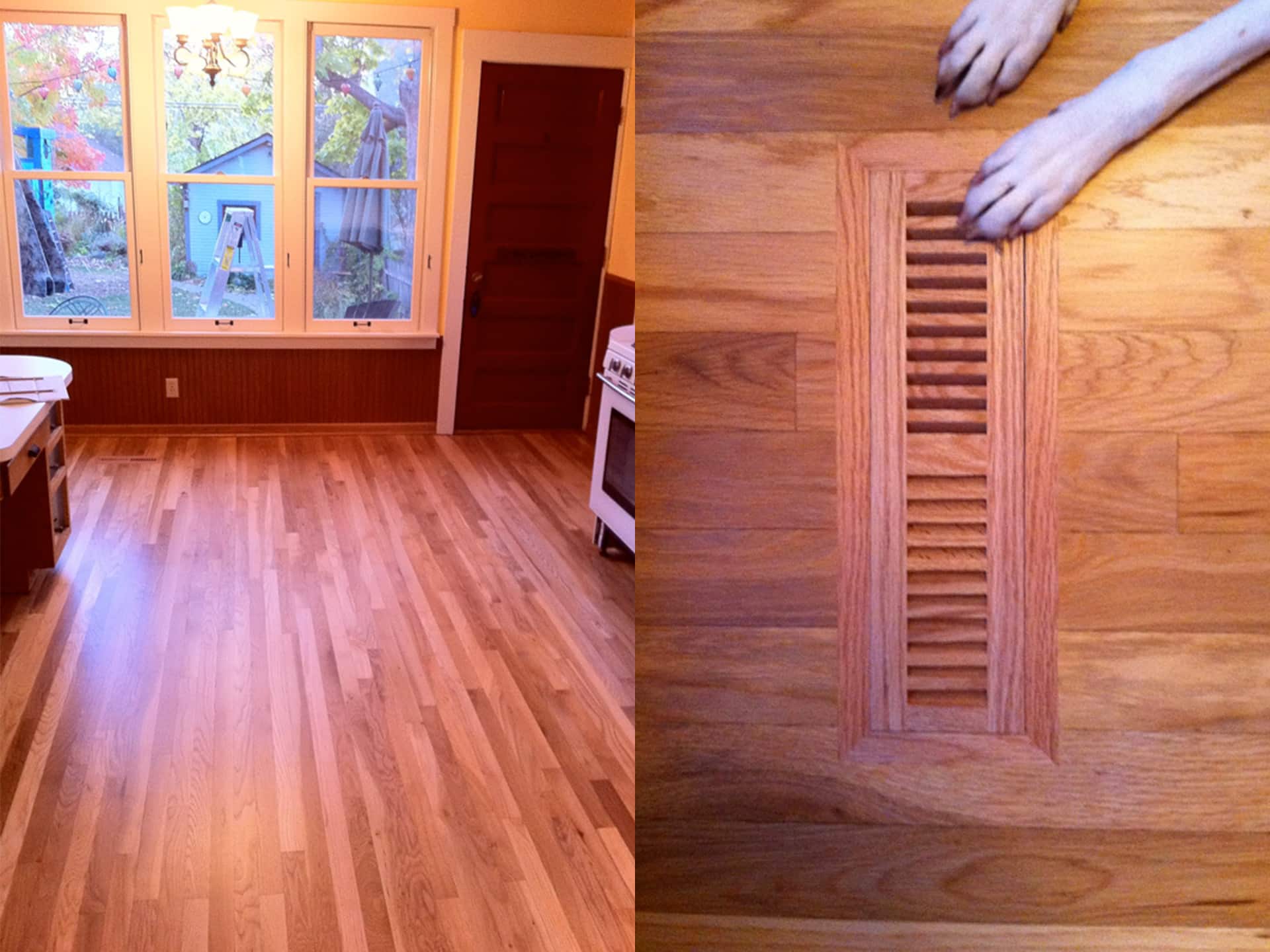 “It all seemed to start with that unnerving cleaning and moving of possessions. The fridge wasn’t the only one hit. Dusty shelves were cleared, drawers removed, and places were scrubbed that probably haven’t seen soap since Queen Victoria played fetch with her dog Dash. I kept a low profile, to be safe.

When I came home from daycare that first day, the kitchen door was shut for the first time since I took up residence. The little brown dog was banned from the best room in the house.

Mysterious smells of fresh wood wafted under the door. I sensed a presence – or the lingering scent of a visitor now departed. I was perplexed, to say the least.

Then I remembered a stranger named Bob.”

Read the rest of Carmella’s story below!

Read the rest of the story

Bob had visited a month or so ago. I remember him well because he was invited in – rather than chased off like other clipboard-wielding folks who knock on our door. Bob started exploring the house like a hound. Seriously, he had his nose to the ground like the best of us — scanning rooms, peering into corners, cocking his head in contemplation.

“Tell me about this.” he said gesturing to the living room floor. I studied the empty floor. What did he see?

There was nothing there.

It was then that I realized that Bob was some kind of psychic. He must sense a presence from the other side — right at the edge of our living room. My hackles rose. Was there spirit in the living room next to my favorite TV nap spot? I always thought that draft came from the chimney.

“Oh…” said Susan blushing. “We move the chair back and forth to watch TV.” Huh?

Bob’s expression stayed completely neutral, but I could sense his bottled tension. “Stop by the shop and get some chair pads.”

Hmmm…how would chair pads help banish a spirit? I’ve watched “Ghostbusters” with the boys plenty of times and there were never any pads involved.

Bob resembles Peter Venkman only a little. But I think they are in the same line of work.

I trotted after them as they went upstairs. Bob stopped on the threshold of Boy#2’s room.

“That’s strange,” Bob said, frowning slightly. Bob was staring at another blank spot on the floor. My hackles rose again and a growl rose in my throat. I prepared to make a break for it. “You have water damage. That is a very strange spot to have water damage. What happened there?”

Oh my gods, I thought, a water spirit lives next to my kennel! Bob doesn’t look at all like
the Ghost Whisperer. But I think they would have plenty to talk about.

“Right there. You can see the boards are cupped with the moisture.” Bob walked over to the spot and laid his hand on it. “Feel it… Can’t you feel it?”

I leaned closer and sniffed. I could smell a whiff of dampness. Susan reached out tentatively and touched the spot on the wood floor. I wanted to drag her away, Lassie-style. Don’t touch the ectoplasm, Susan!

“Oh, dear,” she said, “But what could possibly cause water damage in the middle of the bedroom? There aren’t any pipes under there.” And no, that spot wasn’t my fault. I pee outside…mostly.

“Well, I can’t work on that until it dries out,” said Bob. “You’ll have to track down the source. Maybe it was a one-time event.”

Geez, I hope so! I sleep a foot away. In a locked box.

Bob went back downstairs and looked around the kitchen some more, measuring it and taking notes. “This is a pretty straight-forward job. There won’t be a lot of mess,” he said. “And I have a brand new machine on order. It will trap almost all the dust.” He handed Susan an estimate of costs and put us on his schedule. “I should only take a few days. You won’t have to move out.”

I wonder if that’s what they told Mrs. MacNeil in the Exorcist. The Exorcist also took several days, as I recall.

Bob went away and I forgot all about his visit. A month later, I was at doggy daycare. And when I came home, the kitchen door was shut.

“Let’s just peek,” Susan said to Boy #2. They opened the door and peered in. Bob had gone home for the night but he’d left his equipment behind.

This machine appeared to be used to suck up the spirits. It looked very powerful. So powerful it seemed to have vaporized all the varnish off the floor as it worked. It was attached to another machine (see below) with a big black hose.

This giant vacuum apparently trapped and stored the evil spirits. I gave it a wide berth. I hoped Bob had taken the day’s worth of ghosts back to his storage facility. There didn’t appear to be any paranormal activity in the tank.

The petite machine must be for the little guys – or the faster ones that try to hide in corners. Or maybe it was used to clean up the last bits of ectoplasm. It reminded me of a bot on MST3K.

Bob came on Monday and left on Wednesday. He worked alone. He said he didn’t like having to supervise other folks. Being a floor whisperer must be lonely work.

Bob not only removed the spirits, he left behind gleaming floors that look like new. I guess ghostbusting is hard on the floors so he had to refinish them. They look pretty good.

Bob also put in a new grate. Maybe that was how they were getting in. I assume he sealed up any doors to the underworld. No “Amityville Horror” here!

Susan also painted the whole kitchen and replaced the warm window shades – I guess you can never get that exorcism smell out. She even refinished the kitchen table and chairs.

They also bought a new stove even though the other one wasn’t that old. I think the range was where the demons were living. It often possessed my Susan and made her burn things and spew bad words. The electronics were always haywire and the knobs kept spontaneously melting. I think they replaced them all at least three times. The new appliance seems spirit-free. So far.

All in all, Susan seems pretty pleased with Bob’s services. Our kitchen is more cheerful and homey. It makes Susan happy. And a happy Susan means more baked goods for all.

If you need a floor whisperer, you know who to call.